Last month, I interviewed and photographed nine Filipino student leaders at San Diego State University in eight days. I drove through the parks of Chula Vista, walked along the coast to Seaport, and sat in the sand at Mission Beach, all for the perfect portrait. We talked about their childhood, their families, their experiences of becoming the leaders they are today. The importance of representation was repeated often and they were thrilled to be the role models they didn’t have as young adults.

Caili Anderson is a fourth-year political science student applying to law schools. Anderson’s leadership roles include mentorship at the Black Resource Center and vice president of the Black Prelaw Association. She asked if we could meet at the beach to do her portraits. She didn’t hesitate to take off her shoes and feel the sand on her feet. She looked like she was enjoying every second of being there.

For her, being a leader means standing up for her community and not being afraid to do what is necessary, even if it may not be the most popular option.

The 21-year-old has expressed the importance of Filipinx leadership when it comes to representation.

“As an underrepresented group, it’s very important because we’re a minority on campus and just with our history and oppression, it’s really important to have leaders in our community to raise Filipino voices and … to share the importance of our history and our culture”. 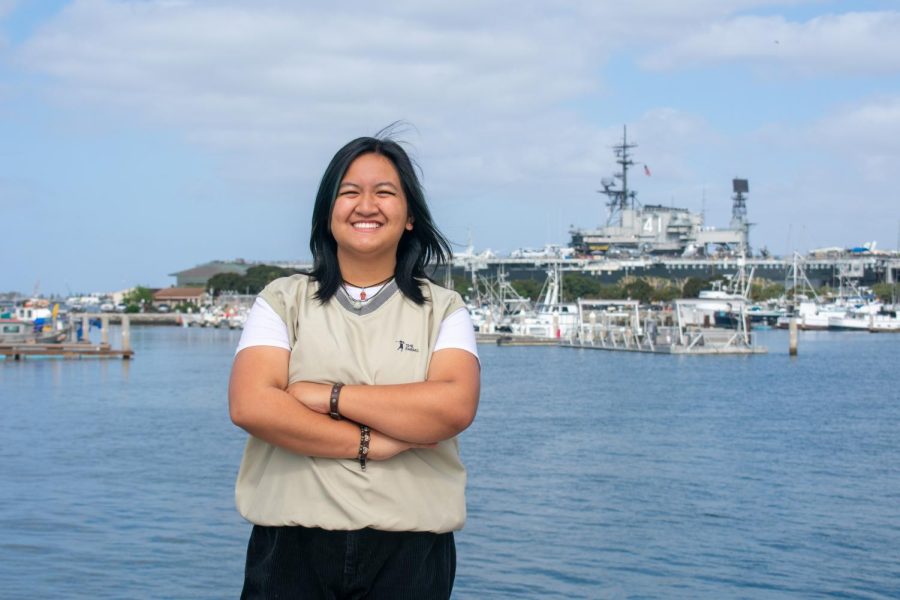 Deanna Magpali is 20 years old and entering her fourth year. She majors in Psychology with a double minor in Counseling and Social Change as well as Child and Family Development. She lived in several places growing up in a military family, spending a lot of time in Japan, Washington and California. Magpali is the Vice President of Internal Affairs of the Asia-Pacific Student Alliance. Her family inspired her to seek therapy and break the cycle of family trauma.

As a leader, she takes pride in the impact she has on others. She understands that making decisions and giving advice to others involves great responsibility.

Magpali recalled times when Filipino leaders felt rare when she lived in Washington and even on the SDSU campus.

“I didn’t really have the same representation…I found myself looking for that,” she said. “And so when I couldn’t find it, I just decided to be myself.” 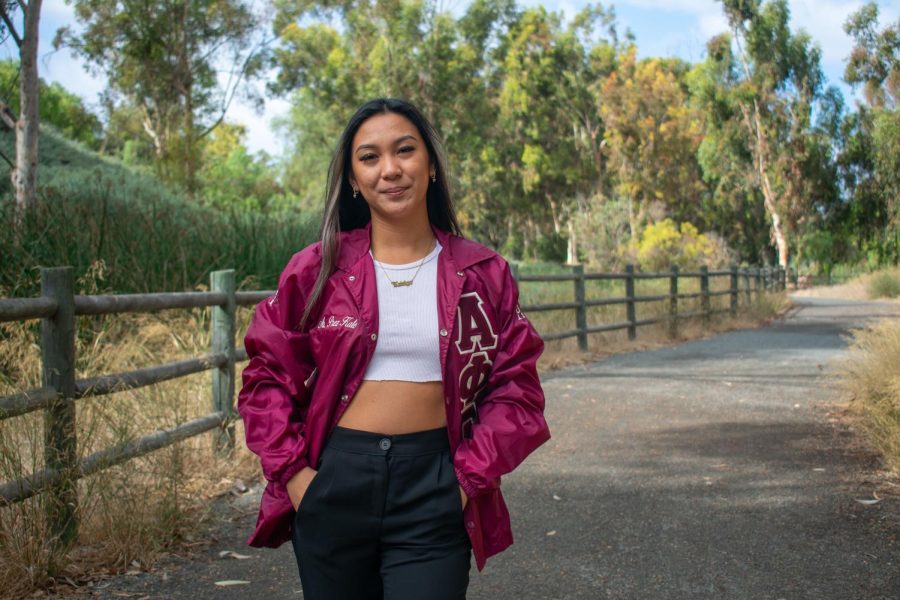 Katelyn Factoran, 22, is enrolled in SDSU’s Masters in Educational Leadership program with a major in student affairs. Factoran has held several leadership positions, including president of her sorority, Alpha Phi Gamma, and vice president of diversity, equity and inclusion for the Women’s Network. “Wow, I really did all of that,” she said, thinking back to the roles she held as an undergrad. She looked proud of herself.

Leadership came naturally to her growing up as the eldest of three children, constantly caring for and supporting her younger siblings. She said Filipino women are not often seen in leadership roles.

Factoran said she wanted to inspire future leaders. “I hope younger generations can say ‘Look at her. She’s a Filipina woman and she can do all of that. I can do it too,” she said. 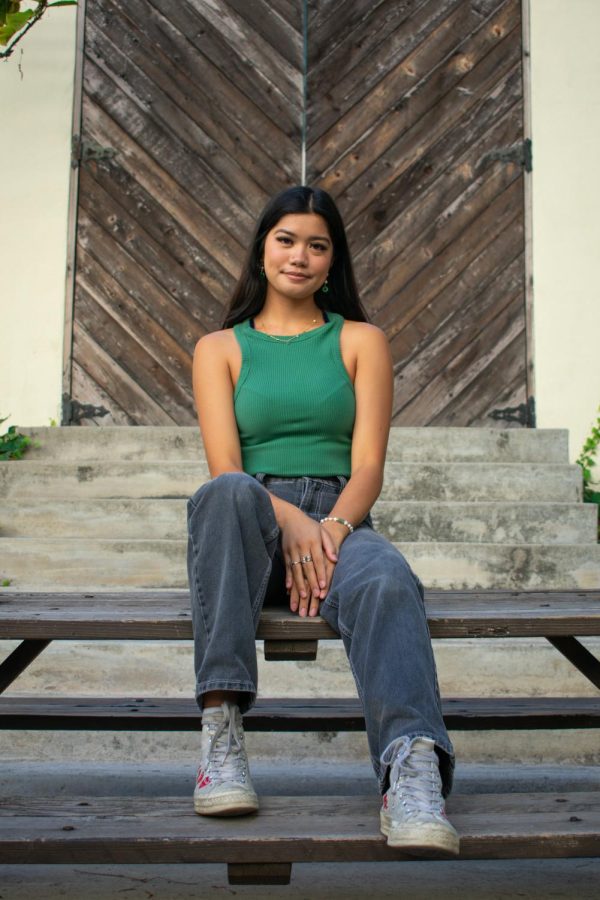 Alexis Bautista Maxion is a fourth-year television, film and new media student majoring in production. She is president of the student diversity commission for associate students and president of Andrés Bonifacio Samahan. She said she believed she had become a leader.

“I found my voice, I found a lot of my passions, and somewhere along the way I was able to develop a way of speaking for myself and also speaking for others. And I think that that’s the main thing that I really tried to carry as a leader.

Bautista Maxion explained the importance of leadership in Filipino communities, emphasizing the idea of ​​collectivism in the Philippines. People carry the legacy of their ancestors and struggle with them as they move forward. “…that’s why we’re continuing this leadership to make sure that whatever we’re fighting for, whether it’s imperialism, whether it’s human rights and martial law…it continues to operate today, even though there are thousands upon thousands of us miles away. 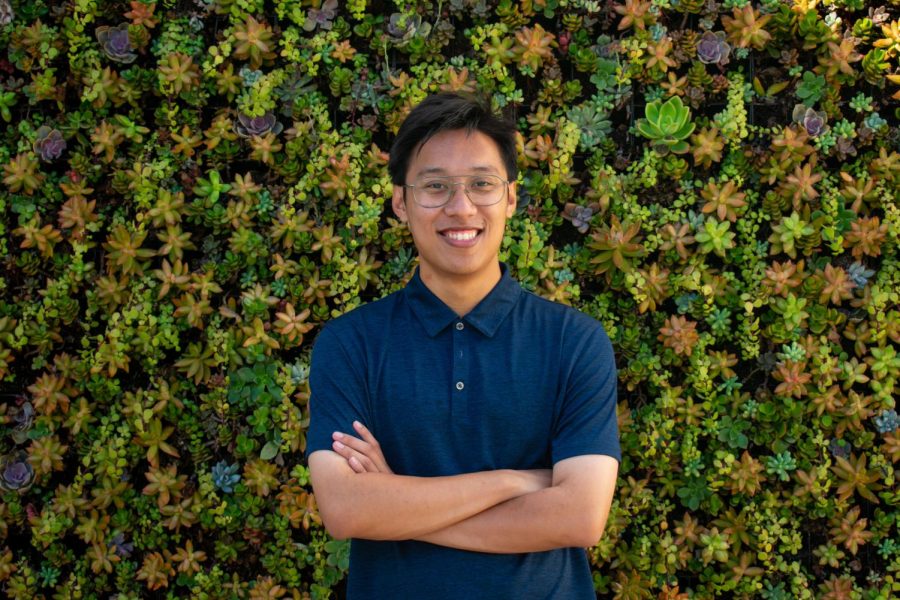 Joshua Blue Dumaua is a fourth-year kinesiology student majoring in pre-physical therapy and a minor in interdisciplinary studies. He is President of the Korean American Student Alliance, Executive Chairman of the Asian Pacific Student Alliance, and Student Office Assistant for the SDSU Administration Building.

Blue Dumaua said he leads by example. When he tries something new, he shares his experience with others so they can learn from his mistakes and feel encouraged to take on similar challenges.

“I’m very transparent about my mistakes, but also about the accomplishments I’m making,” Blue Dumaua said.

For him, the importance of leadership in the Filipino community is to have role models. He said there were more Filipino leaders represented than when he was younger. Public figures who embrace their heritage and are proud to be Filipinx, give more people role models to look up to in the community.

When asked if he had anything else to say to end the conversation, he simply replied, “I love my mom and my dad.” 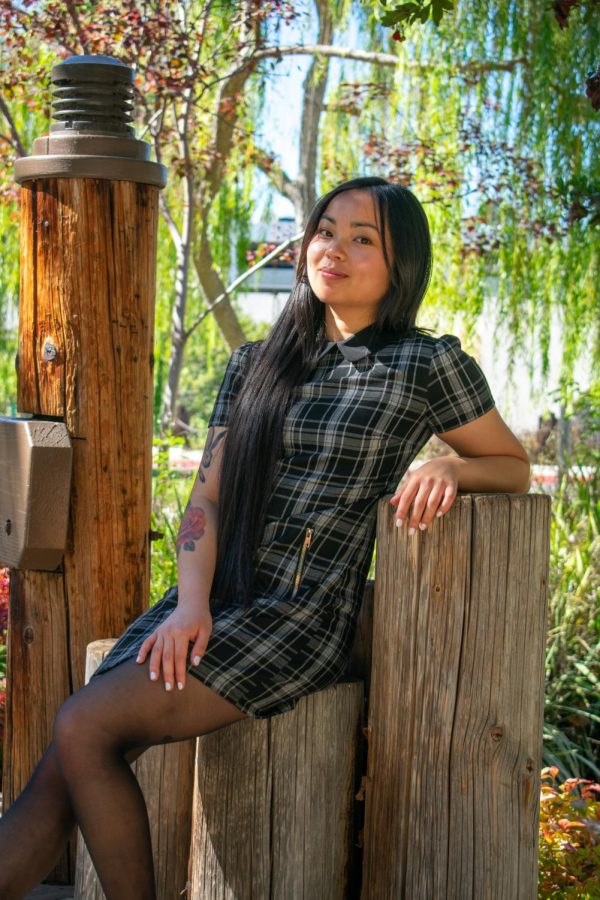 Sara Rose Fausto is 22 years old and studies integrated marketing communications. She said she was the type of person to walk into a room and act with a focus on unity and teamwork. She served as President of MiraCosta Community College International Club from 2019-2020 and most recently as Director of APSA Music in Spring 2022.

During his leadership roles, Fausto learned that being a strong leader “…is not just about letting others lean on you, but also knowing when you need to lean on others…No big leader really can’t do it alone.” Considering the importance of Filipino leaders, she said she believes the representation of Filipinos in such roles is important, but what makes a truly good leader is their actions.

In his experience, the Filipino culture is incredibly collectivist, which means they learn to put the welfare of the group before their own. The emphasis is on family values ​​and the idea that everyone takes care of each other.

“When you have a leader who strongly believes in it, lives by it, and implements it themselves, that’s what brings others together,” she said. 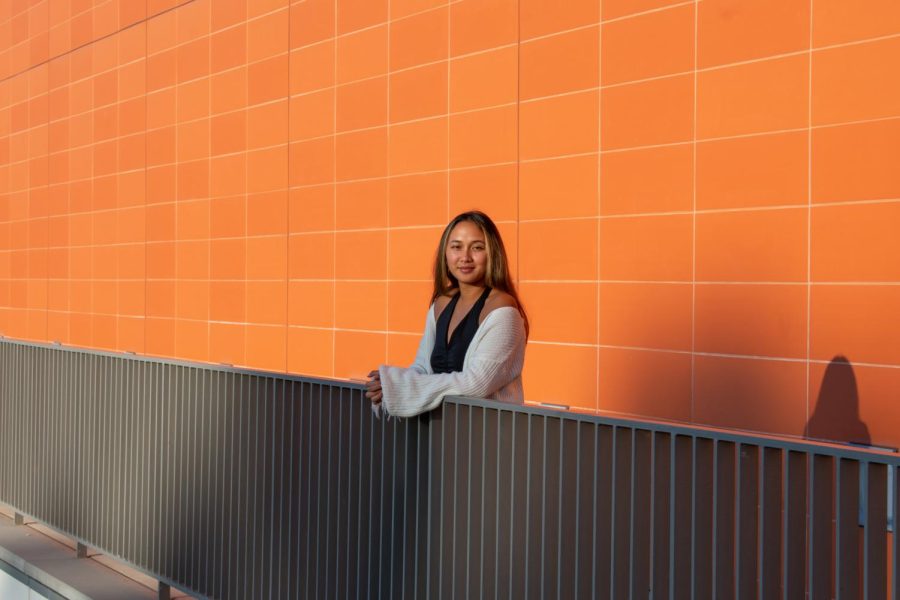 Micaela Rafael is a fourth-year mechanical engineering student. She is president of the Society of Women Engineers, where she said she strives to inspire women in engineering to advance in their careers. Rafael said she considers herself a leader because “I strive to change the environment that I find myself in,” she said. “I also aspire to motivate people to engage in their passions, while offering support when they need it.”

She said she believes family and humility are an integral part of Filipino culture. “…as a leader you’re in a high position and it’s easy to have some kind of ego taking over, but having the humility and empathy to support the people you you represent is really important,” she said. “Leadership is needed in the Filipino community to guide social harmony. We know that’s not always possible, but it’s important that leaders have, as I said, empathy and humility to help guide towards some kind of solution in the event of chaos or of discord. 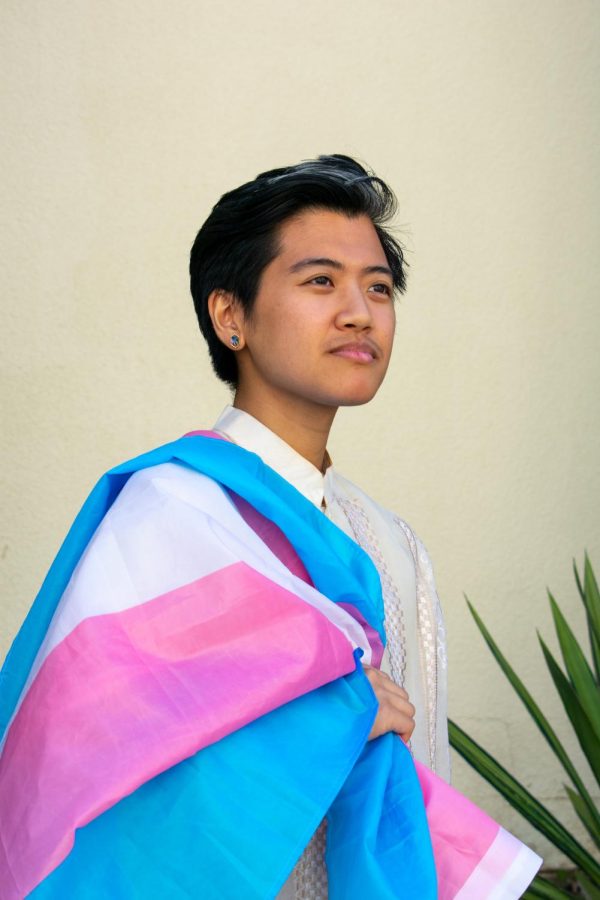 Elias Malachi Enguancho is a fourth-year mechanical engineering student majoring in biological engineering. He is 21 and said he hopes to apply to medical school after graduating from SDSU. Malachi Enguancho has held several notable leadership positions over the years, including as a peer counselor at the College of Engineering, academic coordinator for the Asian Pacific Student Alliance, and board member of Engineers Without Borders. He said his Myers Briggs personality test accurately rated him as a lawyer.

“I have a lot of intersectionality with my identities, being Filipina and transgender and just growing up relatively spiritually. So where I’m from, I haven’t seen a lot of people who were like me,” he said. “It was a predominantly white area, being in Temecula. It just made me want to spread the advocacy and be representative of people who can identify with me.

Asked about the importance of Filipino leadership, Malachi Enguancho said in the United States that Filipinos hold many labor-intensive professions, but fewer leadership positions. “The representation of Filipino leaders shows that our employees are also capable of being managers, not just managed,” he said. “As a future doctor, I hope, I want to show minority groups – Filipinos and LGBTQ+ in particular – that they too can lead if that’s what they want.” 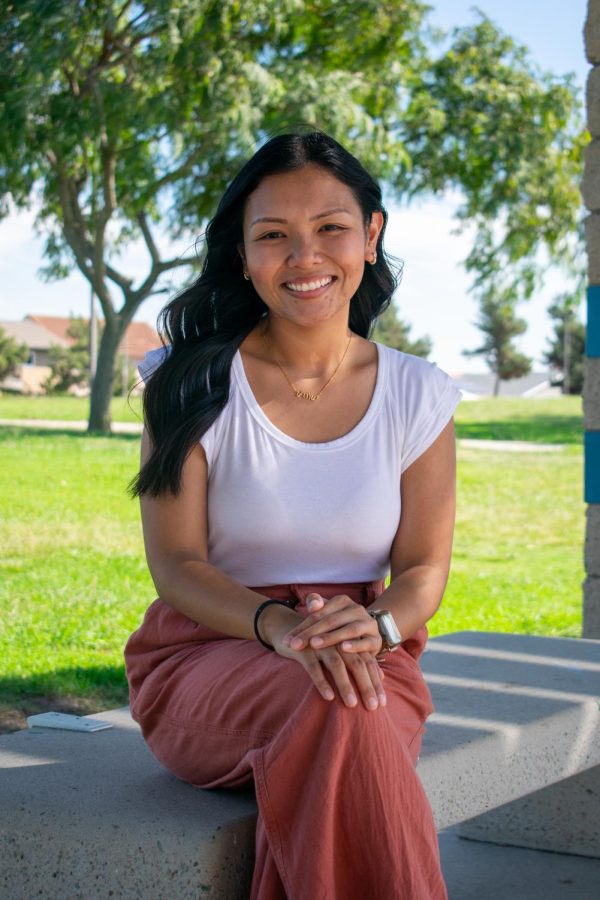 Giannela Gonzales is a 24-year-old graduate student enrolled in the Elementary Education Teaching Diploma Program at SDSU. She was born in the Philippines and moved to San Diego when she was 10 years old. Gonzales grew up next to Breen Park, the very place where we met to discuss his experiences.

His leadership style focuses on collectivism and the idea that community members give each other a sense of belonging and identity. Gonzales mentioned that she was inspired by the impact of being a Filipina leader on young students. His students are delighted to have a relationship with someone who looks like them and who speaks the same language that is spoken at home. Gonzales said it was hard to see herself as a leader, but she was grateful to be seen as one. She said she didn’t have the opportunity to experience that kind of connection when she was little. Now that she is heading into leadership, she is grateful to be able to bring this to the next generation.

After taking portraits and discussing her passion for teaching, she added a final statement for future leaders.

“No matter what you look like, no matter where you are from, trust that there is a leader within you and that you can also be in these spaces in the future or now,” she said. .