Fact check: The woman in this photo is the student leader of Kerala, not Rana Ayyub

An image is being shared virally on social media with the claim that it shows journalist Rana Ayyub arrested by police during a protest. It showed a lady uttering slogans being dragged away by police officers in what appeared to be a road picket.

“Jinnah was always right ..what a brave girl ..hi brave Rana Ayyub may ALLAH be with her,” the viral image was captioned by multiple users.

Similar claims have been archived here and here.

The India Today Anti Fake News War Room (AFWA) found the allegation to be misleading. The lady in the picture is not Rana Ayyub, but student activist Aysha Renna. The photo was taken in Malappuram in Kerala earlier in June.

A reverse search of the photo brought us to the “Fraternity Movement Kerala” Facebook page. The Fellowship Movement is the student wing of the Welfare Party of India political group.

The page featured several Malayalam news stories that had used the now-viral photo. They had gathered several information about a police crackdown on a protest organized by their members in Malappuram district on June 12. According to this information, it showed that National Secretary Aysha Renna was being mistreated by the Kerala Police.

According to these reports, the Brotherhood organized the protest to condemn the action of the UP police against their leader, Afreen Fatima. Activist Afreen Fatima’s house in Prayagraj was razed by the UP government. It came after Afreen’s father, Javed Mohammad, was named by UP police among the conspirators of the June 10 violence which saw rocks thrown and vehicles burned.

On Aysha’s Facebook account, a poster of the “blocking of the national road” in Malappuram on June 12 was recovered.

We found multiple TV reports confirming that the woman in the video is Aysha Renna and not Rana Ayyub.

After confirming the identity of the protester, we checked whether the police had arrested Rana Ayyub for any public demonstration. However, there has been no recent information on this. This allowed us to conclude that it is the photo of a student protest in Kerala that is shared as that of a police action against journalist Rana Ayyub. 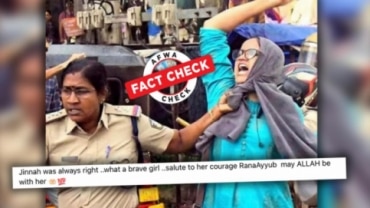 To claimJournalist Rana Ayyub was forcibly taken away by the police in the middle of a public demonstration.ConclusionThe woman in the photo is Aysha Renna, leader of the Brotherhood Movement. She was taken while detained by Kerala Police at a roadblock in Malappuram district on June 12, 2022.