To be depicted in one of the most famous photographs in history can be a blessing and a curse.

For Phan Thi Kim Phuc, known as the ‘Napalm Girl’, the nine-year-old South Vietnamese child depicted in Nick Ut’s Pulitzer Prize-winning photograph, running naked down a road, her clothes having burned off her body after A South Vietnamese napalm attack was the last.

“As the famous person in this picture, I couldn’t go to school. I lost my freedom, I lost my ambition and my hope. Many times I thought about suicide,” recalls Kim Phuc – now settled in his home in Ajax “I kept asking why me? Why didn’t I die? Why am I in pain now?”

Phuc would eventually go back to school but this photograph, titled ‘The Terror of War’ and taken in Trang Bang on June 8, 1972 during the Vietnam War, would come back to haunt her once again.

During her first year of medical school in 1982, her story became “hot” again and Kim Phuc was expelled from college to become a symbol of propaganda for the communist regime.

“I was rediscovered and reporters came and wanted to interview me and it got in the way of the school,” she said. “Again, I said ‘why me?’ I was so alone because I couldn’t go to school anymore. I became again a victim of the war.

His salvation turned out to be faith. She became a voracious reader at the university library, and the New Testament became her favorite book. Kim Phuc, he quickly converted to Christianity.

The conversion was “very difficult”, because she had been a devout follower of the Cao Dai religion and also because being Christian – an “American” religion – was frowned upon in 1980s Vietnam. But she learned to forgive, a trait she carries with her to this day. 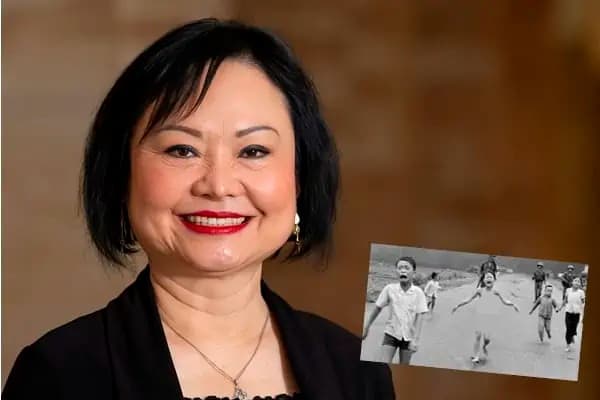 “Four napalm bombs nearly killed me but I didn’t die,” she said. “But I remember despair and I remember searching, searching for answers for my purpose in life. And I learned that God wasn’t done with me yet.

Four years later, she was granted permission to continue her studies in Cuba after Vietnamese Prime Minister Pham Van Dong became her friend and patron. In 1987 she met Bui Huy Toan, another Vietnamese student and after a five-year romance, they got married.

The newlyweds flew to Moscow for their honeymoon and on the way home, during an hour-long layover to refuel in Gander, Newfoundland, they got off the plane and weren’t never looked back.

“At that hour, I made a decision: I will not go back and I am so grateful that Canada accepted us.

The couple first settled in Toronto before moving to Ajax in 1997, the same year she established the Kim Foundation International to help children affected by war.

“I knew in my heart that I wanted to be a doctor, but I still keep that dream alive by helping others,” she said. “Our mission is to be a partnership to build hospitals, schools and libraries for children.”

The famous snapshot, which was named World Press Photo of the Year in 1973, was first denied as a hoax by President Richard Nixon, and there were enough Americans who believed it that Nixon – yet to two years since his fall at Watergate – would be re-elected in November, prolonging the carnage in Vietnam by another year.

For young Phan Thi Kim Phúc, the photo was a painful reminder of a four-month stay in hospital and 17 surgeries before she could live a normal life, as normal as it might be to be. a “celebrity” in the post-war period. Vietnam. Kim Phuc recently returned from Poland where she helped 236 Ukrainian refugees – along with many children – to come to Canada on a special flight from Warsaw to Regina. The plane used for the mission is owned by Ut – who she speaks to weekly – and carried an image of her iconic 1972 photo with the words “No War” written on it.

“Now I don’t run with my photo, I fly with this photo,” said Kim Phuc with a smile. “This photo used to be a burden in Vietnam, but now it helps people.”

Kim Phúc, who was made a member of the Order of Ontario in 2004 and received the Dresden Peace Prize in 2019, said helping people through her foundation makes all the suffering she has endured worthwhile.

“Seeing these people, these children, brought tears to my eyes,” she said of July’s rescue mission in Poland. “I’ve been there. The war destroyed my body, my village. I felt so much for them and that was 50 years ago.

“Thirty years ago I was a refugee myself, so I’m grateful that I was able to give them hope. I tell them, ‘don’t lose hope.’ They were so happy, so grateful. It was so moving and a wonderful time for all of us.

Subscribe now to receive our daily email of today’s top stories in your city!

How to copy and paste from a photo or video

Hetero-interfaces in the photo- and electrocatalytic separation of water